by Ingo Fiedler, Lennart Ante, Fred Steinmetz, Sönke Häseler
The current system of securities clearing and settlement is dysfunctional, slow, prone to fraud, and expensive to operate
An alternative system based on distributed ledger technology could eradicate any uncertainty as to who holds a given security and the associated rights at any time

The current system of securities clearing and settlement is dysfunctional, slow, prone to (tax) fraud, and expensive to operate. An alternative system based on distributed ledger technology could eradicate any uncertainty as to who holds a given security and the associated rights at any time. This would allow for much more transparent and efficient clearing and settlement.

On many securities markets around the world, there is an increasing discrepancy between the frequency at which securities are traded and the time it takes to actually process these deals. Trading positions are often only consolidated once a day, positions that may be held by investors for only a matter of minutes or even seconds. Due to practices like ‘netting’ and ‘offsetting’, situations routinely occur in which it is not entirely clear, at a given point in time, who exactly holds a specific security. This extends to the rights and obligations associated with it, such as voting rights, dividend claims and tax implications.

Dividend payout days are a particularly popular time for stock deals intended solely to abuse the existing uncertainty as to who actually owns the shares at that critical moment. That uncertainty arises, in part, from the fact that it is technically possible in a number of major jurisdictions for a security to be owned by multiple parties at the same time.

“Distributed ledger technology, which permits a continuous and complete record of all transactions, could facilitate a timelier, more efficient, and safer system of securities clearing and settlement.”

Perhaps the most common scheme to exploit the existing regulatory loopholes and inappropriate clearing procedures is known as ‘dividend stripping’. The practice has been responsible for billions of lost dollars in tax income, as showcased, for example, by the recent ‘cum/ex’ scandal in Germany.

Distributed ledger technology (DLT), which permits a continuous and complete record of all transactions, could facilitate a timelier, more efficient, and safer system of securities clearing and settlement.

DLT and The Digital Age

The first major step in the digital age was the ability to duplicate content without any loss of information and disseminate it at will. Assets like securities, though, are not intended for duplication. Instead, it is imperative that they be assignable to only one (economic) owner at any one point in time.

So far, the digital transfer of property has always depended on a central player maintaining a central register. However, such systems are often inefficient because they create incentives for manipulation and fraud, and because of the administrative effort required to run them.

DLT now permits the second major step in the digital age: the transfer of (digital) property relations in decentralised transaction databases or account balance databases, which removes the need for centrally controlled registers.

The transaction data is disseminated and confirmed within a decentralised network that requires no central entity. That way, the ownership of any asset is always distinct, definite and can be transferred with full transparency.

“DLT now permits the second major step in the digital age: the transfer of (digital) property relations in decentralised transaction databases or account balance databases, which removes the need for centrally controlled registers.”

While the Internet protocol suite (TCP/IP) enables the transfer of information via the web, the consensus protocols of DLT form the basis of the secure transfer of assets, and thereby uniquely allow for transferring values. These standardised consensus mechanisms can replace the intermediaries that assume the risks arising during asset transfers and the central authorities that safeguard the assignment of property rights.

Consequently, substantial efficiency gains may be realised in a range of industries in which intermediaries are currently performing costly and time-consuming tasks in the processing of transactions.

According to a 2016 report by the European Central Bank, the clearing and settlement of securities is a particularly important potential application of DLT. Similarly, in a recent survey among financial experts conducted by Blockchain Monitor, applying DLT in the field of security transaction processing is attributed to the greatest potential benefits among financial use cases.


A blockchain-based system of securities clearing and settlement could most suitably be implemented as a closed system, a so-called ‘permissioned ledger’. The details of implementation would depend on a number of technical specifications, facilitating the required scalability of the system. They would also include access constraints in the form of read and write permissions, procedures to validate the transactions, and the data structure of the blockchain.

In the following, the potential of DLT will be demonstrated using the simple example of a blockchain-based determination of voting rights.

Facing high-frequency trading and the common practice of shareholders transferring their voting rights to a third party (typically their bank), imagine a stock company that needs to determine exactly who is entitled to vote at its shareholders’ meeting.

We will show how this can be achieved elegantly and cheaply thanks to the complete traceability of stock ownership afforded by a blockchain-based system. The basic elements of such a system are depicted in the figure below. 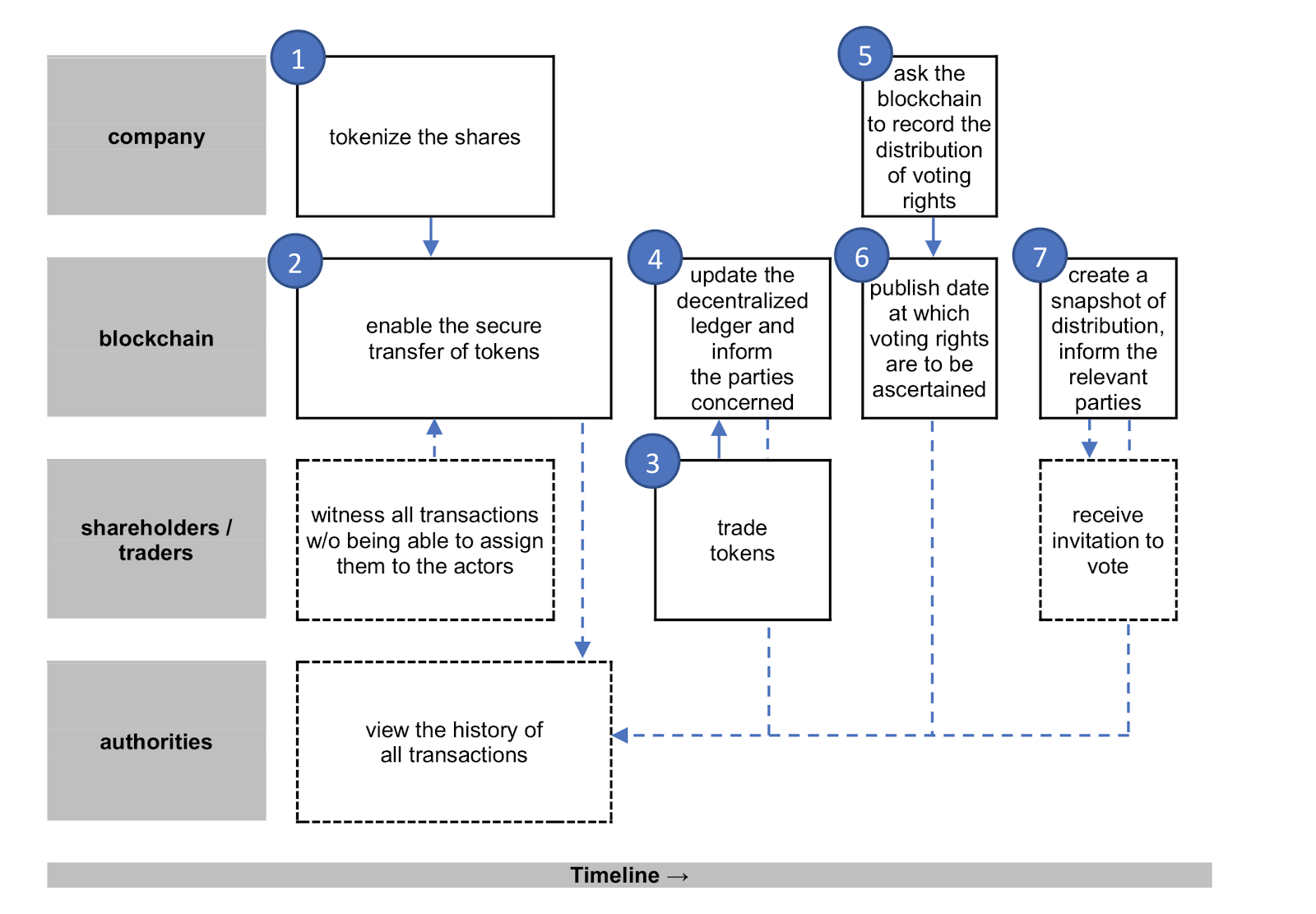 The process comprises of the following essential steps:


DLT and The Voting Process


The cryptographic methods that underpin DLT can also be used to conduct the voting procedure itself on the basis of a distributed ledger. It can be done via signed messages on the distributed ledger or by means of additionally created, transferable tokens that represent the voting rights.

That way, it is also possible for shareholders to authorise third parties to vote on their behalf. If the vote is conveyed purely by a message, a shareholder signs the vote with a cryptographic key that only they can possess, because the signature is unmistakably associated with the portfolio of shares.

In the alternative scenario, an additional token is created for each voting right and thus for each share. The token’s validity for the purpose of voting can be limited to a certain period of time. A transaction of the token then corresponds to the act of voting. In both cases, the validity of a vote is checked fully automatically.

The application of DLT ostensibly does not mean any change to the voting process itself, and the shareholders may not even notice the new technical infrastructure. Changes apply merely to the background processes, specifically regarding the verification of the validity of the votes submitted, the ascertainment of the number of shares held by each shareholder, and the distinct distribution of shares.

The Benefits of Using DLT in Voting

In our example, efficiency benefits come from the greater ease of ascertaining who holds the company’s shares at any point in time.

With today’s infrastructure, by contrast, the voting process is more costly and more prone to fraud. The complete processing of a transaction may take several days, making it difficult to pinpoint the exact distribution of the shareholdings and thus obscuring voting rights.

“A distributed ledger provides a great deal of transparency for regulatory supervision, as well as substantial cost savings, as the need for harmonising proprietary databases diminishes.”

Moreover, a decentralised database (such as a distributed ledger) provides a great deal of transparency for regulatory supervision. It also provides substantial cost savings, as the need for harmonising proprietary databases diminishes.

By applying specific cryptographic methods and selectively adjusting reading rights, sensitive business data in the shared ledger can be protected while being selectively accessible for supervisory authorities.

Consequently, DLT can enable a system of securities trading that is transparent, efficient and much less prone to fraud.


Blockchain and The “Right to Be Forgotten”

Blockchain technology is developing at such a pace that it is difficult for regulators to keep up. The European Union has taken a hard line on data privacy with the implementation of GDPR, which itself has significant implications for blockchain. GDPR’s central tenet of the ‘right to be forgotten’ is potentially at odds with the immutability and decentralisation of blockchain. It is likely, though, that the regulation will serve as more of a moral touchpoint for the development of blockchain in the EU, and that regulation will work around the tech.

The United States has taken very much a “regulation first, business later” approach. According to Fortune, the skepticism inherent in the approach has both restricted the mainstream applications of the tech and deterred major crypto-companies from operating in the US.

At the other end of the scale is the East Asian market. Blockchain companies have largely been able to operate without restrictions in the region. Recently, as cryptocurrency exploded, East Asian nations have begun to input significant regulations, and the situation differs greatly from South Korea to China, for example. Ultimately, it’s an area conscious of providing a positive environment for the technology’s growth.

This article has been submitted by the team of Blockchain Research Lab. We would like to especially thank Dr. Ingo Fiedler, Research Director of the Lab, Affiliate Professor at Concordia University, Montreal, holding a position at the University of Hamburg. He follows Bitcoins and blockchain since early 2011 and was the first economist to hold a seminar for Masters students on the implications of virtual currencies and blockchain technology.