by Margarita Khartanovich
Since most industries are regulated, the need to know who the participants in the network is crucial
Hyperledger Fabric allows businesses to implement and integrate blockchain into their processes

IBM’s blockchain initiative is slightly different from the blockchains whose names are commonplace today, like Bitcoin and Ethereum. Unlike those blockchains, there is no currency involved, and while those distributed ledgers are mostly public networks, the Hyperledger Fabric is a permissioned one.

It is mainly aimed at businesses and allows them to implement and integrate blockchain into their processes while operating, developing and governing on a ‘cloud-based platform. It is open-source as well as a collaborative effort of those whose stated aim is ‘to advance cross-industry blockchain technologies.’

Hyperledger’s partners include companies across sectors such as finance, banking, Internet of Things, manufacturing and more. Since the IBM Blockchain is based on Hyperledger, there are a number of things that Big Blue is invested in, with the prominent ones being Hyperledger Fabric and Hyperledger Composer. The Fabric is the technology itself, while with the composer, they can offer solutions that enable the creation of blockchain applications in a simplified manner.

“You can still do privacy, you can use the identity to work out who can see what on the shared replicated ledger and you can do things like encryption if you need to.”

Hyperledger uses Practical Byzantine Fault Tolerance (PBFT) to reach consensus instead of the proof-of-work protocol that Bitcoin and Ethereum use. The blockchain solution from IBM also allows businesses to use ‘embedded logic in smart contracts’ so that they can deploy automated solutions. 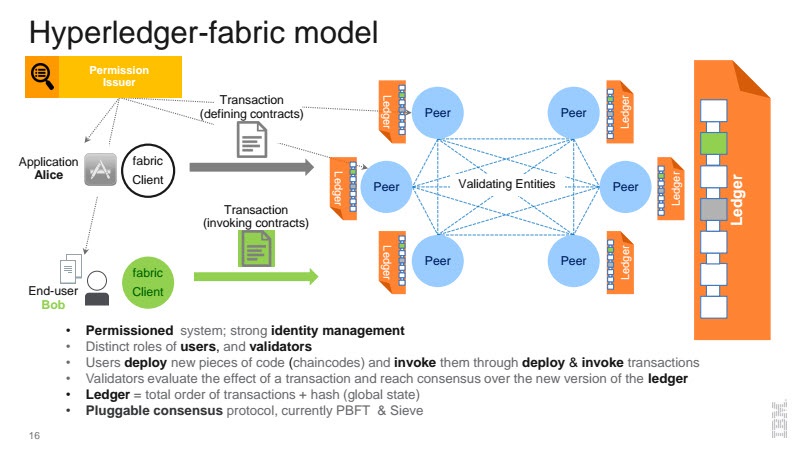 We talked with David Gorman, from IBM Global Blockchain Labs Enablement and CTO at IBM’s Europe Office. He shed light on Hyperledger, IBM’s work on Hyperledger and the state of the blockchain today. He is of the view that, since most industries are regulated, especially the banking industry, the need to know who the participants are in a network is crucial. He explains, “when we look at something like Hyperledger Fabric, it’s intended for private permissioned business networks where there is known identity. You can still do privacy, you can use the identity to work out who can see what on the shared replicated ledger and you can do things like encryption if you need to.”

The reason why so many companies are opting for the blockchain, he says, is for trust reasons, especially when they’re dealing across organisations. He cites the example of Nestle and Walmart who are working with IBM to build a ‘food provenance network’ using blockchain technology. David says that, in this case, there is a need to track through each step on different supply chains right from the farmer to processing, then all the way to logistics companies and the end consumer. In the case of supply chains, they have blockchain working with IoT and Watson Analytics.

“You can use some IoT devices and they can record events on to the blockchain, you can put your service level agreement and you can code those inside smart contracts.”

Citing a use case, David presses the case for blockchain-for-business, “We did quite a good use case around the shipment of bananas, for example; when bananas are shipped, they have to be held within a temperature range otherwise they ripen too quickly. How do you track that when your shipments of bananas are traveling around the world? You can use some IoT devices and they can record events on to the blockchain, you can put your service level agreement and you can code those inside smart contracts. If the temperature range goes outside an agreed range, then maybe the smart contract says ‘I’m going to reject that shipment’ or, ‘I’m going to pay less for those bananas because they’re going to ripen more quickly’. We’re seeing a lot of integration between blockchain, IoT and Watson Analytics.” 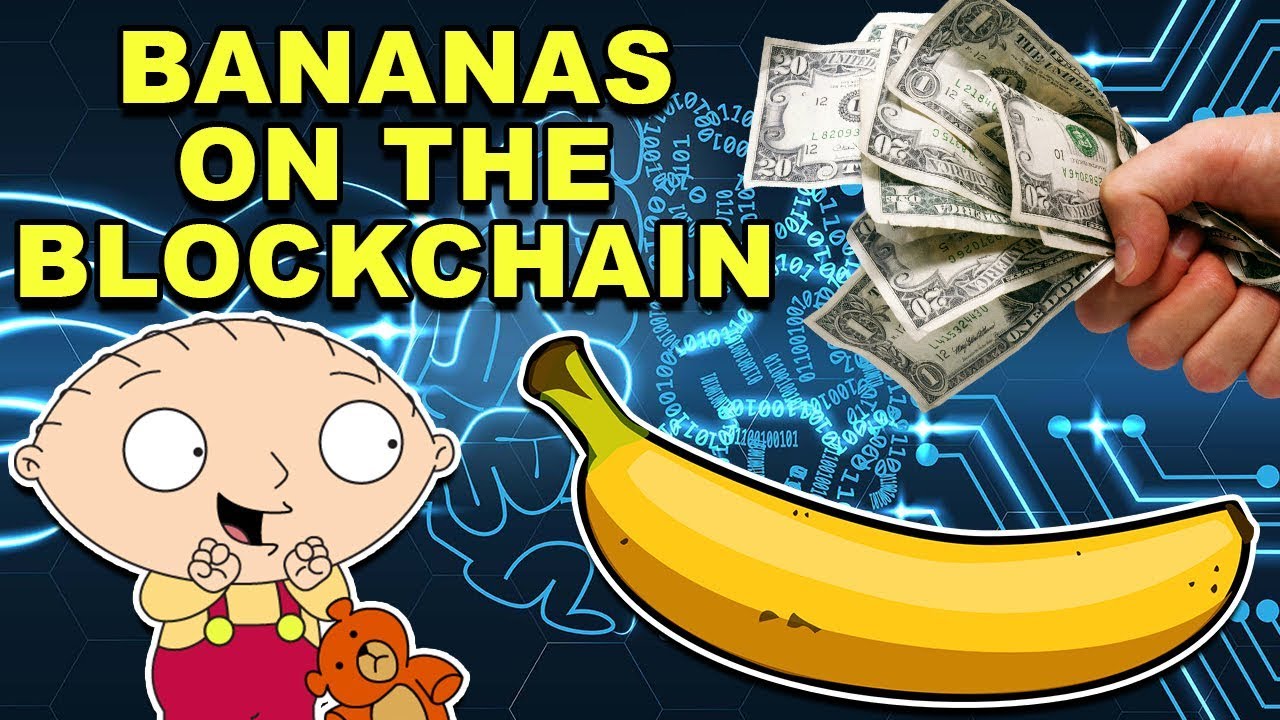 Does Blockchain Need a Reality Check?

Speaking with David Gorman, we asked him how possible it was to implement blockchain with IoT, considering known scalability issues, especially in light of what some experts like Patrick McCorry have claimed. He agreed that there is a scalability issue with how blockchain stands today – there are roadblocks preventing the processing of tens of thousands of transactions that traditional processing systems do not face.

However, the key lies in aggregation, and David thinks that using Watson, it could be possible to receive thousands of events from IoT devices, aggregate and then filter them using just the essence of the blockchain.

Returning to the banana example, he said that in that case, they might set up the system in such a way that only those events which go beyond a certain range are recorded. In that case, if the temperature goes beyond a certain level, Watson would let that pass on to the blockchain. This could then be used for provenance and trust purposes.

The Problem of Blockchain Divergence

At the moment, we have a number of public blockchains in existence. Gorman says that newer private blockchains and proof-of-concept pilots are also coming into production. So, one of the critical issues is how to bring these networks together. It is a question of the technology maturing and with that also the understanding of the technology becoming more mature too.

“Some people call it ‘inter-ledgering’ —  there are other terms for it — but we’ll see other networks being joined and being able to do queries across and invoking transactions across networks.”

Expressing hope for the future, David reflects, “Over time, those concepts will probably happen and it might be that there’s some connection between the private and the public networks as well. I’ve certainly seen that talked about. It might be that you do some of your transactions on private networks then you switch to public networks for other transactions. Some people call it ‘inter-ledgering’ —  there are other terms for it — but we’ll see other networks being joined and being able to do queries across and invoking transactions across networks. We’ll see that happening as it’s definitely something the community is talking about.”

David has been working with IBM’s Global Blockchain Labs Enablement Team, a mouthful of a title, but he is basically a tech guy. He does everything from talk with CEOs about blockchain concepts to helping people code. He reveals that his latest work has been on solution architecture on a project involving the finance industry.

Talking about his work, he says, “I’ve been doing a lot of work around security —  cross-organisational security with blockchain just recently. That’s an area that we’re seeing a lot of interest. It’s quite a challenging area actually because when you have multiple organisations on a network, how do you have those different trust domains? How does one organisation define their certificate authorities and what participants they trust, compared to another organisation who might have a completely different certificate authority and domain of trust? So how do they all work on the same network?”

While Hyperledger Fabric has a way of sorting out all these requirements, doing it in practice is a ‘different thing’, according to Gorman.

Blockchain development skills are 2nd among the 20 fastest-growing job skills, reports Computerworld. There is certainly a demand from businesses with a desire to blockchain-ify their activities, despite a shortage of people with such blockchain skills. Hyperledger aims to bridge the gap between developers and business people using Composer.

According to David, it makes modelling ‘much easier’. Since Hyperledger utilises Javascript, it makes writing smart contracts easier, lowering the barrier to entry. Terming architecture is an evolving and challenging area, he says, and being a blockchain architect is no longer about a single organisation, but is more of a multi-organisational role, and there is a presence of consortiums to consider.

Talking about the skill shortage, he reflects, “How you architect across a cross-organisational platform with blockchain is an area that is probably quite challenging and quite new to a lot of people as well. I don't know if there’s a skill shortage but I can imagine that there might be.”

Finally, we asked David what he thought about common blockchain myths, and he said that there are a couple that he would like to touch on. Bitcoin and blockchain do get confused a lot and he unravels that by explaining that Bitcoin is a blockchain application. He does acknowledge that Bitcoin ‘kinda came up with the concept of blockchain.’ However, blockchain can be used in many different ways, citing the example of Hyperledger, which works in a private permissioned environment.

“We know enough about the Bitcoin and Ethereum networks, just so that we can draw comparisons to Fabric and Hyperledger, and what Hyperledger is doing.”

We did ask David about developments in other blockchains and whether he followed them. He said,  “I keep an eye on it but my focus is on Hyperledger. We know enough about the Bitcoin and Ethereum networks, just so that we can draw comparisons to Fabric and Hyperledger, and what Hyperledger is doing. But there’s so much happening in Hyperledger, that there’s plenty to keep you busy.”

Asked whether he had heard about Ethereum moving towards proof-of-stake, he explained, “Yes, I heard that they are looking at proof of stake as an option. I’m guessing that’s to improve performance and energy consumption. I don’t know much more about it than that, I believe it’s under development.”

Alongside their own partnership with Hyperledger and advising businesses looking to blockchain-ify their industry, Big Blue has unveiled a new blockchain product, specifically aimed at startups and developers, to allow them to build their own distributed ledger projects. This is alongside is already established enterprise-level blockchain solution offering aimed to larger businesses.

Make no mistake though, you have not fallen into an alternate dimension of corporate altruism. IBM is just one of the many big businesses looking to capitalise on what they, and many others should, realise is truly the next disruptive technology to enter the market. There’s big money to be made in advising and implementing blockchain for corporations, but it is vital that companies stay vigilant about where they want to implement blockchain technology. It is far from a be-all and end-all solution for those with unaddressed structural issues and recognising this should be the foremost consideration.

This article was prepared with the help of the IBM Portugal team and co-authored with BDJ tech writer Shivdeep Dhaliwal.