The Danger of The Digital Divide: How Smart Are The Smart City Initiatives?

In the past, most of the issues that concerned people living in urban environments were socio-economic in nature. Today we have to look at the technical impact of town planning and whether it benefits the many instead of just a few.

The United Nations expects that by 2030, 60% of the world’s population will live in mega cities.

The rapid urbanisation throws up challenges such as waste management, housing, transport, healthcare and waterworks, etc. The use of technology can be vital in solving many of the problems that arise when a population becomes increasingly centralised. In this respect, things are already changing.

Juniper Research has named Barcelona as the Global Smart City. The Catalonian city has improved the way it uses water and energy, as well as other resources by harnessing IoT tech. Barcelona has converted 1,100 lampposts into LED lights, with added sensors that allow for dimming when there is no one around and brightening when the presence of humans is sensed.

Other cities are following suit - Hong Kong has a contactless commuter card that can be used not only for travel but also parking cars, paying in stores and more. Buenos Aires has set up an entire ministry of modernisation to engage its citizenry in government.

The Digital Divide Is A Class Divide

Figures released by the World Bank indicate that nearly 10% of the world was living in poverty as of 2015, which means 736 million people live on less than $1.90 per day.

Poverty is a symptom of wide systemic issues, but primarily it is the inaccessibility of resources needed for human development. Factors range from poor urban transport, which hinders growth and causes lack of employment avenues, to the lack of accessibility for the disabled which hinders their movement.

All of these issues get compounded in major cities, making the lives of the poor and vulnerable in urban environments more difficult.

The specific focus on urban centres is also worrying. This means that swathes of the population that live in rural and semi-rural areas (along with suburbia) might miss out on the technological advances planned for urban centres.

“We have to first ensure that everyone has access to technology”

“We have to first ensure that everyone has access to technology,” Shivani Chaudhry says. “In countries like India, there exists a very large digital divide – not only between urban and rural areas, but also within urban areas.

“The digital divide is a class divide as well as a gendered divide. Much work needs to be done to ensure that this gap is closed and that everyone, including women, have access to technology.

“Once we are able to assure that, realistic needs assessments are required to identify the problems and determine the solutions. The benefits and limitations of technology also need to be realistically assessed.

“Generally, there is no information or awareness about the impacts of technological interventions, especially with regard to security, privacy, and transparency. Adequate data legislation is also required in all countries.”

The Role of Technology

While there are real and valid concerns about the technologies that will be used in these smart cities, their scope also needs to be examined.

In a report published by McKinsey, “Smart Cities: Digital Solutions for A More Liveable Future”, some of the smart applications that they examined included security apps such as predictive policing, gunshot detection, home security systems etc.

They also looked at municipal systems and utilities such as home energy automation, smart street lights, smart irrigation, water consumption tracking, optimisation of waste collection routes and more. The conclusion was that smart technologies could improve key indicators by 10-30%. 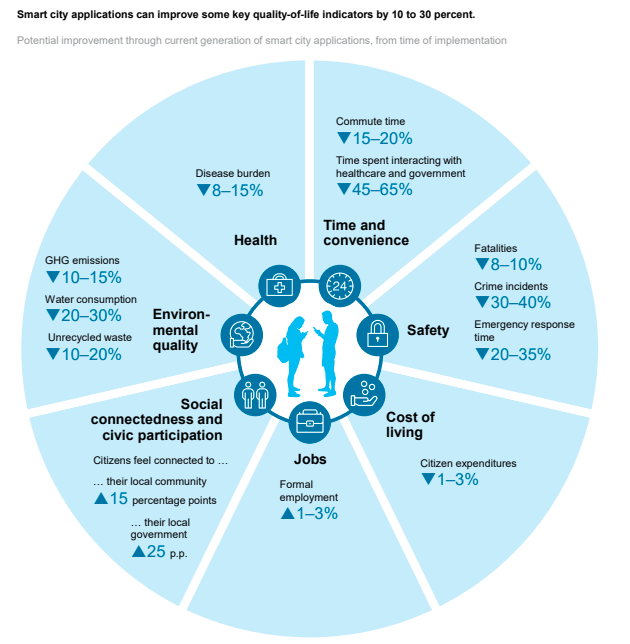 It is reasonable to expect technology to improve lives. At the same time, though, there are areas of concern like surveillance of citizens, privacy, security of data and the right to anonymity. In some cases, privacy has to be traded for convenience. While this may be acceptable to one person, for another it may not be an option.

Chaudhry feels that while technology may be morally neutral, its use and implementation is not.

“Efforts must thus be taken to ensure that it promotes equality and does not exacerbate inequality by excluding those who do not have access,” she says.

Chaudhry’s point of view is that while technology is not a “panacea” to all problems, it should be seen as a tool that can bring about durable solutions.

She adds, “A combination of approaches and strategies is needed to promote inclusive and equitable development; the most important of which would be the adoption of a human rights approach that strives to ensure that ‘no one is left behind.’”

The Indian government plans to create 100 smart cities by the year 2022. To this end it has begun a ‘Smart Cities Mission’, the purpose of which is to drive economic growth and improve the quality of life of people by enabling local area development and harnessing technology, especially technology that leads to ‘smart’ outcomes.

The project was launched in June 2016 by Prime Minister Narendra Modi. Two years later, the inclusivity this programme has achieved and what it has managed to accomplish is under the microscope, particularly given that India is an underdeveloped country where nearly one sixth of the world’s population lives.

“Almost four years after the launch of the Mission,” Chaudhry says, “it is difficult to gauge its progress or its achievements or even to be able to ascertain whether any city has become ‘smart’, especially because there are no benchmarks or indicators for implementation and assessment.”

According to Chaudhry, the scheme has other shortcomings as well, such as the focus on only 100 cities from among India’s 7800 cities and towns. The bureaucratic process of setting up a framework for the programme and setting up implementation bodies has taken precedence, rather than what Chaudhry calls “achieving significant results”.

A Smart City Leaves No One Behind

Ambitious programmes aside, there is a real danger that the digital divide can turn into a digital chasm if the public and the private sector do not address the human issues of smart city planning.

There is also a danger that the digital divide can worsen when smart cities and smart regions exist alongside the not so smart parts of a country or region. This could lead to discontent and civil strife in our societies.

“States must work in collaboration with others to ensure accountability, transparency, and good governance”

So how do we build a smart city? Chaudhry feels that  a city should first be inclusive and then focus on becoming ‘smart.’ “The definition of a ‘smart city’ should encompass inclusion, equality, social and economic justice, and the realization of human rights for all,” she says.

“A ‘smart city’ should be a city in which everyone’s ‘right to the city’ is respected and upheld. It should be a city that offers opportunities and benefits to all, including the right to participate in the development of the city and to decide on how and what the city should be.

“This means providing a voice and space for everyone in the city – including marginalized groups, children, women, transgender persons, persons with disabilities, older persons, and others living in the city.”

Inclusivity can only come about when states incorporate a focus on human rights into urban planning. The fundamental democratic processes must be protected.

As Chaudhury puts it, “States must work in collaboration with others to ensure accountability, transparency, and good governance. They should adopt human rights approaches to urban development, ensuring the linkage with rural development. It is only then that cities can become more inclusive.”

Smart cities are generally focused on the use of data to optimise how they run, but other technologies are being developed to make cities more efficient environments. The conservation of energy using sensors on street lamps is one example. Another, though, is looking to turn the very streets we walk on into passive generators of energy that could power those smart street lamps numerous times over.

London-based startup Pavegen is developing energy-harvesting tiles designed to replace the ‘dumb’ concrete slabs that make up our pavements. Every tile is made from 95% recycled tires and can generate up to 8 watts of kinetic energy from just one footstep. Extrapolate this out across a year on a busy London street and the energy gains can be significant. Every step, for example, could power an LED street lamp for 30 seconds. The tiles are already in place on one street in London’s West End, and as their worth is demonstrated it is expected they will feature in refurbishment projects the world over. Smart cities don’t just have to conserve energy, they can create it too.