VR Beyond Entertainment: How Avatar Embodiment Increases Our Cognitive Performance

The high immersive capacity of virtual reality is often acknowledged as its main virtue when compared to other media and communication technologies. It is indeed a defining virtue. However, when it comes to the virtue that could really position VR as a powerful positive technology in the market, we have to look at another key feature: avatar embodiment.

Avatars are digital entities that represent users in a virtual world. When we embody an avatar, it becomes our body in virtual reality. We have control over its movements. If we look down, we see the body of our avatar where our real body would normally be. If we look into a virtual mirror, we see ourselves transformed into that avatar.

Our avatar is also the way in which other people in the same virtual world see us. In turn, we also see - and interact with - other users through their avatars.

Not all virtual reality experiences involve avatar embodiment, though. In fact, it is still not common to have full avatar embodiment in mainstream VR products. For instance, we are used to using a head-mounted display (HMD) to visualise a virtual landscape in which we do not have an avatar, or in which we only saw its hands.

Similarly, we are used to playing online games in which we see our avatar on the screen and control its movements with a joystick. We wouldn’t consider this to represent an avatar embodiment experience, though, as it lacks the spatial coincidence between the user’s body and that of the avatar.

Experiencing an Avatar as If It Was Our Own Body

When we embody an avatar, something extraordinary happens. We experience the illusion of body ownership, as if the avatar has temporarily become our own body, a phenomenon that has been widely reported in virtual reality.

Researchers have also found that, in addition to body ownership, our sense of self gets transported to the body of our avatar. In a way, we become our avatars while we are in VR.

The avatar embodiment illusion is achieved using visuomotor synchronisation between our body and the avatar. To do this, users are generally equipped with an HMD, which is a device worn on the head that allows them to visualise immersive environments while occluding the real surroundings.

Users’ gestures are tracked and mapped to the avatar with the use of body tracking technologies so that the user and the avatar are synchronised. Hence, if we raise our right arm, the avatar raises its right arm accordingly. Head movements are used to update the perspective in the virtual environment in real-time.

The rubber hand illusion, which was a fascinating psychological experiment conducted in the late nineties, helps us to understand why ownership illusions over avatars occur.

Multisensory correlations between our real body and a fake limb or virtual body - either in the form of visuomotor (as in virtual reality) or visuotactile correlations (as in the rubber hand illusion) - seem able to easily deceive our brain. The brain fairly quickly interprets the fake body or limb to be a part of its own anatomy.

Note: You can easily replicate the rubber hand illusion at home by filling out a rubber glove and asking someone to simultaneously brush your real hand (out of sight) and the filled rubber globe with two thin paint brushes. You should start noticing the results in less than two minutes.

Avatar Embodiment Can Modify Our Behaviour

Researchers have been studying the psychological effects of avatar embodiment experiences for more than a decade. There is significant evidence that these experiences are capable of modifying our behaviours and even elements of our cognition.

One of the first empirical demonstrations of this transformative capacity was named the Proteus Effect. This effect, documented in the late 2000s, describes a phenomenon by which the appearance of an avatar has the ability to modify the behaviour of the person that embodies it.

The Proteus Effect is linked to the way in which people associate certain traits with the appearance of an avatar. We might, therefore, engage in certain behaviours in response to what we believe is expected from our avatars, based on the appearance that the avatar has. 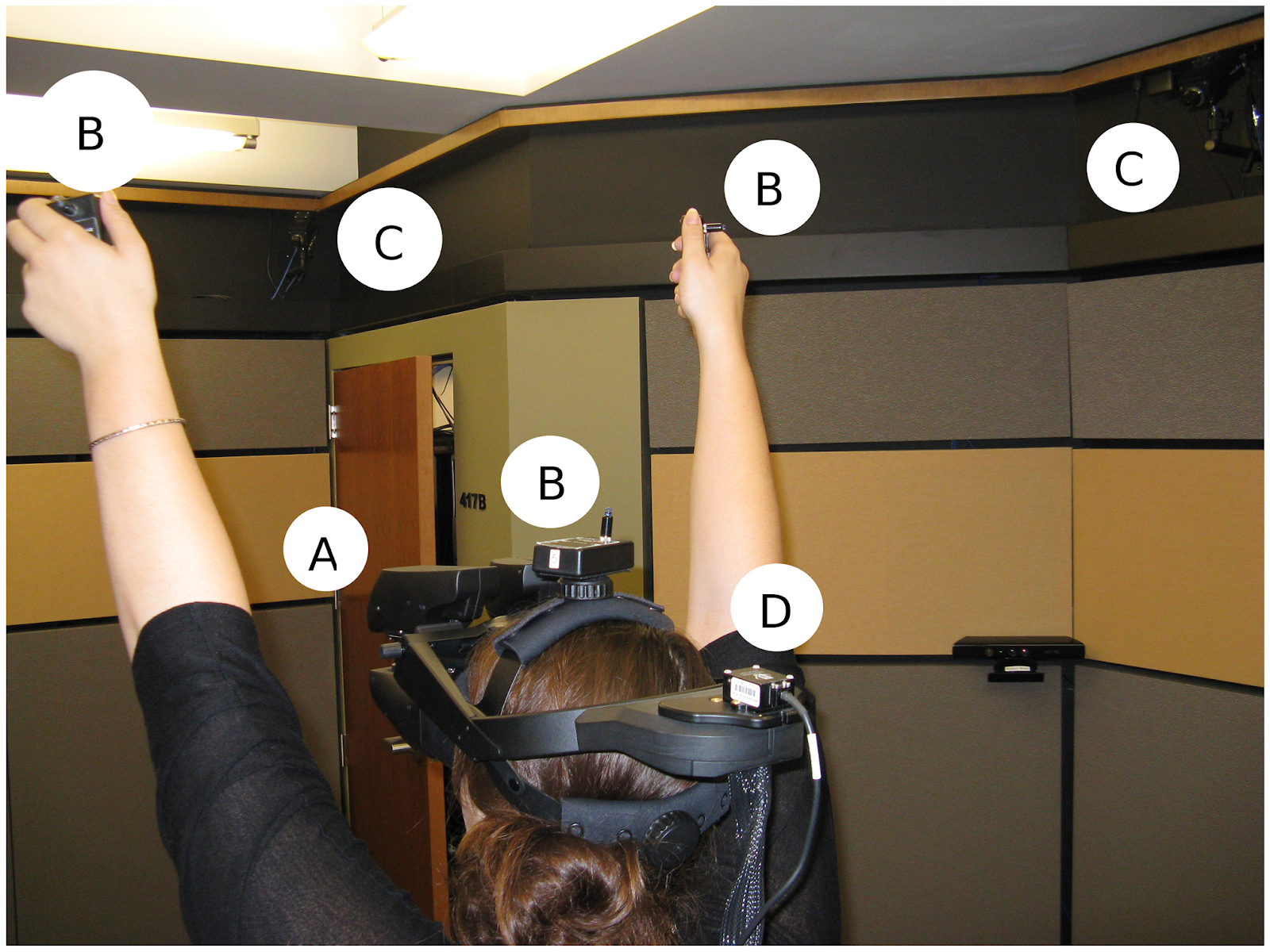 VR researchers have been exploring how avatar embodiment transformations could potentially be useful to society. Could they provide us with tools to become the best possible versions of ourselves not only in virtual reality but also in our real lives?

Importantly, we have evidence that the behavioural changes resulting from avatar embodiment experiences can persist even after the virtual reality experience is finished.

Among many other findings, we now know that avatar embodiment experiences can be used to encourage pro-environmental attitudes and prosocial behaviour or to decrease social phobia. These experiences can also help reduce negative stereotyping of the elderly or forms of racial bias.

Recent studies have looked not only at behavioural and attitudinal changes but also at cognitive modifications. They got surprising findings, such as the fact that avatar embodiment can even increase cognitive performance. 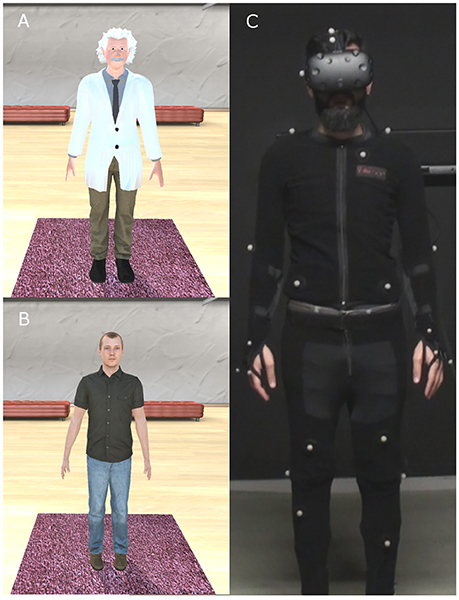 Figure 2. The experimental setup. The body of the participant was substituted by a gender-matched VB, viewed from 1PP, onto which body and head movements were mapped in real time. (A) The Einstein virtual body. (B) The Normal virtual body. (C) Participants were fitted with an HTC VIVE head-mounted display, and their body movements were tracked by 37 OptiTrack markers. Source: Frontiersin.org

Note: The reader might be wondering whether avatar embodiment experiences could likewise negatively influence our behaviour or lead to harmful consequences. In a previous article, we noted the existing gap of studies that examine the potential negative outcomes of avatar embodiment experiences and pointed out some ethical, moral, and legal issues that need to be promptly addressed.

VR as a Positive Technology

Virtual reality is seen as more than a tool for entertainment or communication, but the applications and benefits of virtual reality in areas such as health or education could be significantly enhanced if avatar embodiment experiences are implemented.

So far, the transformative capacity of avatar embodiment has mostly been explored in experimental contexts through studies conducted in pioneer VR labs, principally, the Virtual Human Interaction Lab at Stanford University and the EventLab at Barcelona University.

It is important to promote these findings beyond the walls of laboratories, as they are key to unlocking the full potential of virtual realityas a positive technology.

Whatever the benefits of avatar embodiment might be, it is a difficult technology to pull off. Tracking the movements of a user’s hands with controllers is one thing, but enabling full body representation in virtual reality would take the experience to a whole new level. One major tech company looking to make this a reality is Facebook, revealing at its F8 conference that it is working on body tracking that requires no markers or worn trackers to operate.

The demo is short, but the technology is already at an incredibly impressive stage. The track not only follows the body’s movement in a fluid, accurate manner, it can also track movement down to muscle activation level, giving a more detailed output on the screen. Facebook claims the project is operating using only one external sensor and, despite being only a research project at this point, it is shaping up to be special. Similarly, the VR team at Facebook is working on photorealistic face representation which tracks users faces in real-time and displays them almost eerily perfectly with no headset on. VR experiences are growing more and more convincing as the tech develops, and Facebook is one of the companies leading the charge. Whether this is a good thing, given their track record, remains to be seen.